Before I came to Korea I believed that Asians in general were very strict parents. I think most Westerners stereotype Asian parents as super pushy demanding hardcore dictators whose only goal in life is to get their children into the best universities so they can become doctors or lawyers.  You can see this stereotype on a recent Glee Season 3 Episode 3 where Mike Chang receives an A- or Asian F and his father goes ballistic.

While there is truth to the stereotype - Korean parents spend loads of money on their children's education and try their darndest to get them into the best universities around the world - it does not mean that they are very strict when it comes to childraising.  In fact, the opposite is true and it causes a lot of problems in our home and in other homes where Western and Eastern "deep culture" (Hanley, 1999) ideals of childraising are converging.

To illustrate my point I'll share a couple of my own experiences with you:


A couple of months ago our family went to visit our ‘Gomo’ (my husband’s paternal aunt) for the first time in a satelite city near Seoul.  While there my child was acting like a typical toddler.  He was swinging a broom around lots of glass, playing with glass figurines, throwing his pens everywhere, screaming at the top of his lungs.  I kept on telling him ‘no’ but all the adults there, excluding my husband, kept on stopping me and encouraged my son to do whatever he liked.  There came a point when he purposefully peed on me and I lost it and put him in time out and very sternly talked to him.
Well, my Gomo was so upset with me.  She gave me the look of death, picked up my son, and took him out of the house.  Then she came back with him to get something, I tried to get J, but she wouldn’t let me touch him.  Remember – I had just met her that day.
I felt really embarrassed at that time, like I had committed a serious crime.  I wondered what they thought of me and I also felt angry that Gomo just took my son and wouldn’t let me touch him. I wondered if my mother-in-law would chew me out later or if my husband would give me what for, for losing face or something.
In the end, everything was fine.  No one chewed me out, Gomo gave me back J eventually with a smile on her face.
Gomo #2
In the summer we went to visit another Gomo in Jellonam-do.  Now for the past 2 years my son has been taking a nap at 1pm but as soon as he got to Gomo's house he knew he wouldn't have to listen to me anymore so everytime I took him for his nap he would scream and cry his lungs out.
Of course Gomo came into the bedroom and gave me a slap like I was an evil mother and took my son out of the room.  Gomo's husband gave me what for "He's just a baby.  He should do what he wants.  He doesn't want to sleep so let him play."
Well the results were that three days late my little son was a monster.  He started crying all the time, hitting people, and in general was miserable.  I could tell he was so tired but there was nothing I could do about it.
Sleep Training
If any of you have ever tried to sleep train your child then you can feel my pain.  I've been co-sleeping with J for about two years but am getting real tired of it.  I have tried on several occasions to get him to sleep by himself which always results in his crying and a rescue from daddy or grandmother@@
Conclusion
So there are two things here: 1. Children should be treated gently and be allowed to do whatever they want. 2. Elders can do whatever they want and feel they have the say in how a child is raised, even if they are not related to you or don’t know you.
I don't disagree with the way Koreans raise their children.  It is a very gentle, loving approach to childrearing.  I always feel good when J is at a Korean home or around Koreans because I know that no one will scold him or give him a dirty look for acting like a child.
BUT I have been raised in the West where there are very strict rules regarding children and I find that I cannot accept the Korean way totally.  I like J to have a routine, I like him to be respectful, I don't think he should do whatever he wants, and I believe he should sit in time out if he is out of control.
What is going on is that I am experiencing an aspect of the "deep culture" of Korea - something that most outsiders are not aware of.   Hanley uses the illustration of an iceberg to show the difference between surface culture and deep culture.  He (1999) states" ..the journey toward cultural competence is both lifelong and painful" (p. 9).  I agree that it can be painful but very interesting as well. 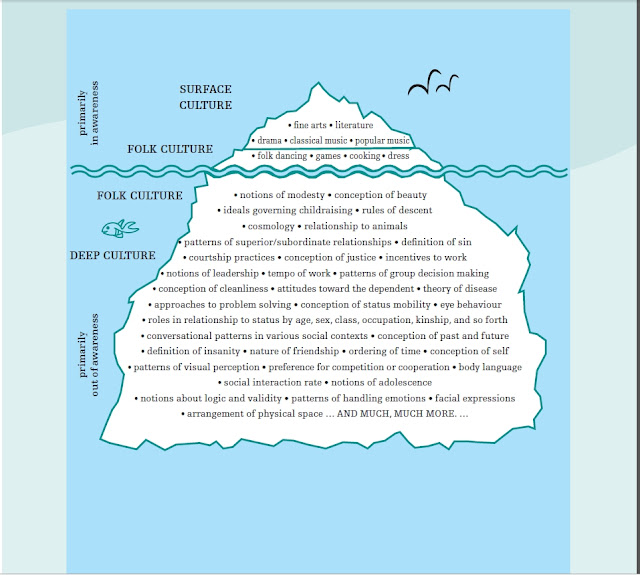