I've been living in Korea for 4 years and had no idea that I could buy over-the-counter cough medicine at the local pharmacies.  I thought, for some reason, that I always needed a prescription.  Anyways I am glad to finally know that I don't need to drag myself and J to the doctors everytime we have a cold - thanks to Alfee^^

Once you go to the pharmacy the pharmacist will ask you which kind of cough medicine you would like by asking which symptoms you have.  Here are some Korean words to help you out: 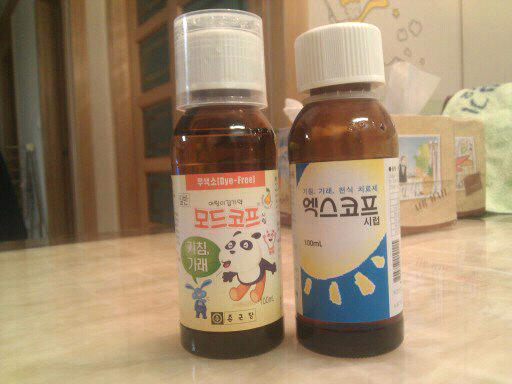 Positives: Hands-free, comfortable and warm for the baby, easy to wash, reasonable price (10$US), can serve as a blanket.

Negatives: Bad for the back, not safe for the baby, hard to tie properly, very warm.

All around Korea it is common to see grandmothers and some mothers with babies and toddlers tied to their backs using a carrier called the podaegi (포대기).  There are various versions of the podaegi but all are common in the fact that the baby is always carried on the back with a blanket like carrier.  The wide blanket podaegi is exactly that – a soft blanket that is wrapped around a person’s middle and tied tightly under the breasts.

Jayden, my son, loves being carried around on his grandmother’s back via the podaegi.  Nothing else in the world can comfort him more except maybe a bottle of warm milk.  Sometimes when he’s really sick or upset and I can’t calm him down, my MIL will come to the rescue saying “업어 재혁, 업어” while at the same time pointing to her back, making welcoming pats.

I’ve tried to use the wide blanket podaegi numerous times because Jayden loves it so much and because it is hands and front free meaning a person can do the dishes, cook, clean, whatever.  But I’ve failed to master the Korean carrier.  The main reason is that it kills my back.

To properly carry a baby with the blanket-like carrier, you must bend your back slightly forward rather than standing up straight.  For me, just a short time, like 10 minutes is enough.  I figured I was doing something wrong so I asked my MIL one time if carrying Jayden on her back hurt and she said yes!  I then tried to show her how to use my Pognae carrier which allows a child to be carried on your back or front but she couldn’t understand all the straps and was just as uncomfortable using it as I the podaegi.

Recently events have turned me against the podaegi.  Jayden is a 20 month year old active and energetic toddler.  His favourite thing to do while on his grandma’s back is push his body out as far as he can go and drop his head down to the sides.  This squirmy behaviour has resulted in him falling – more than once – in scary places like the roof of our villa and the stairs leading up to it.  He does the exact same thing when he’s on my back in the Pognae but the straps and build of the carrier mean that no matter how much he squirms or pushes, he can’t fall out.

I have other concerns with the carrier as well.  When Jayden was just 3 or 4 months my MIL put him in the podaegi but I felt he was much to young as half the time the blanket would be half way around his head or his head would be positioned straight into my MILs back.  I questioned my MIL if it was safe and she assured me that no baby had ever died of a podaegi but I’m not so sure about that.

Secondly, positioning a young baby on your back can be dangerous.  Once when I was taking Jayden off of my back I almost dropped him.  The best way of course is to sit down on a chair or sofa and then undo the straps.

Another dangerous incident occurred the first or second time I tried carrying Jayden Korean style.  I rounded a corner in our house and not being used to having a child sit so far out on my back, I didn’t account for the space needed for Jayden and ended up smashing him into the wall!!!

All-in-all I do not suggest that anyone carry their baby using a podaegi.  Even my MIL who is very experienced using the carrier has dropped Jayden whereas I have never dropped him while using a Moby or Pognae.  It’s not worth the damage it can do to your back either. I do not think that the podaegi is so popular with Korean moms as I seem them using other styles of carriers that Western women use as well.

One benefit I have gotten from using the podaegi is that I now carry Jayden on my back for short distances outside without any carrier, just my hands.  He feels less heavy on my back than carrying him with my arms and he enjoys it.

Today I registered for the free at home Korean classes offered by the Seoul Multicultural Support Centers (다문화가족지원센터) http://english.seoul.go.kr/lh/support/scof4.php.  Note that the website does not list all the centers.  I had to go to the center and bring my ARC and Family Relationship Certificate (가족관계중명서).  Presently there are a number of people ahead of me so it will be a couple of months before classes begin.  The classes last for 1 year for a total of 40 weeks and are twice a week, for two hours a class.    Once at your local center you can simply say I'd like to register for the door-to-door Korean classes ( 가정방문 한국어 교육 등록하고 싶습니다).

There are two semesters: August to December and February to July.

For those of you living outside of Seoul here is the Danuri Multicultural Family Support Center Website: HERE

Information regarding the first day of class HERE

Three months into classes HERE
Posted by Fauna at 10:12 AM No comments: